Birmingham has an incredibly strong Irish music scene, and its time to celebrate that with two days of live Irish music at D.J. Quinn’s.

However, Feile An Fomhair is more than just live music, its a chance to fundraise and support the Irish music scene for The Trip To Birmingham Trad Fest. Yearly, Birmingham Trad Fest run in an inaugural celebration over the long weekend of 22nd to 25th November, aiming to promote traditional Irish music in Birmingham and bring the wider Irish community together through Irish identity, cohesion and spirit. 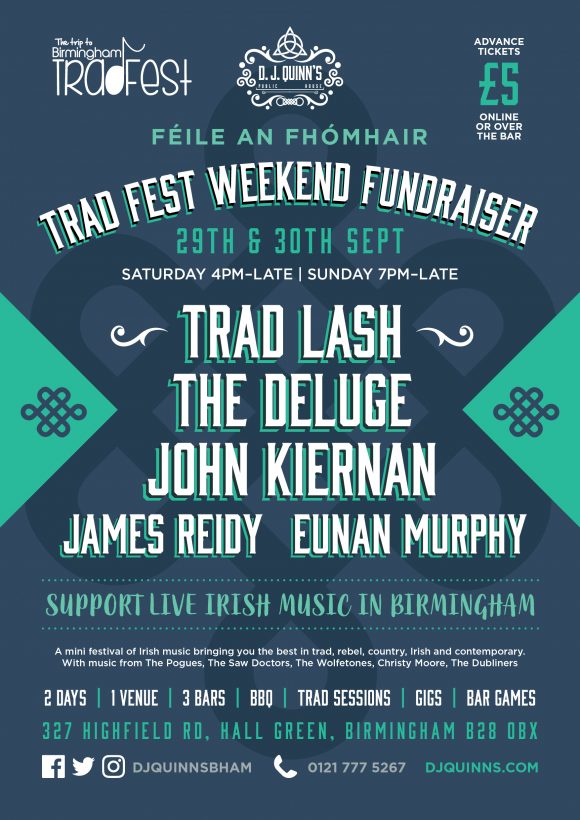 Over September 29th and 30th, D.J. Quinn’s are proud to host a two day fundraiser for the festival, with a range of acts that pub goers love.  Eunan Murphy, James Reidy and John Kiernan will perform acoustic and solo performances. Whilst the powerful folk Irish rock band The Deluge, who performed at D.J Quinn’s grand opening and August Bank Holiday celebrations, will also bring their stellar set of Irish rock and party favourites. Finally, Ciaran Clifford, Dan Green, Tom Davis and Ciaran Scanlon headline the fundraiser as the ever popular Trad Lash.

As well as all these live acts, there will be Traditional Irish music sessions to get involved in, bar games with prizes to be won and a BBQ feast for all. Most importantly, Feile An Fomhair is a chance for everyone in the community to get together and celebrate Irish music in Birmingham over one whole weekend.

For the best in Trad, contemporary, country, rebel Irish music, plus a chance to support your Irish music scene, grab an advance ticket for Saturday, September 29th from Skiddle now. Whilst Sunday, 30th September is free entry.

Catch all the sports action live at D.J. Quinn’s!Hire Us!